Noah Proudfoot and the Botanicals

w/ Noah Proudfoot and The Botanicals 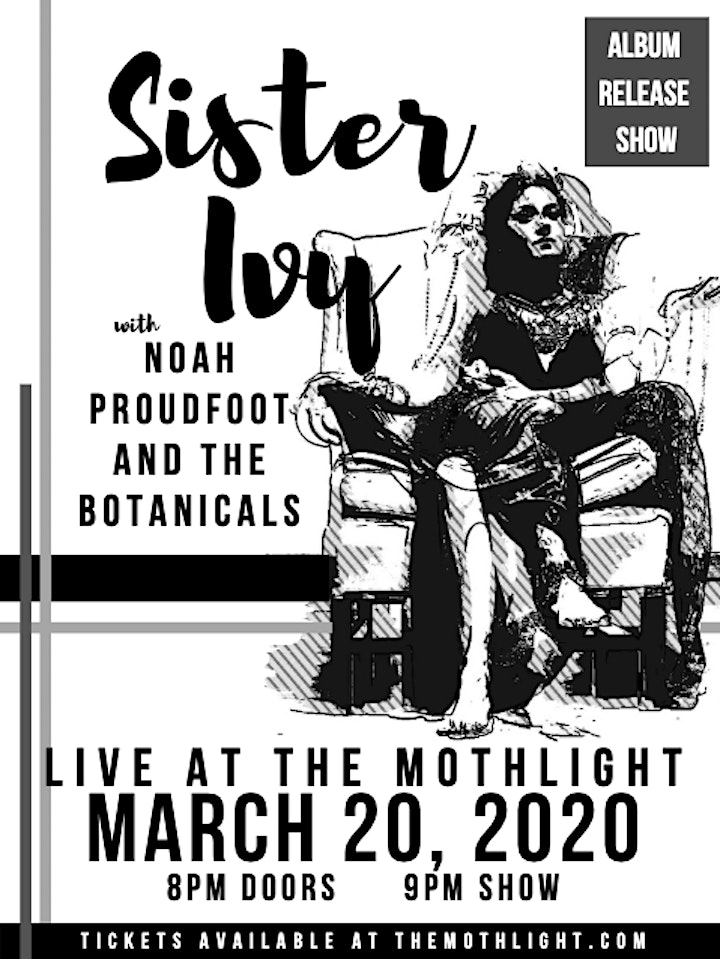 At long last, Asheville-local surrealistic-soul project, Sister Ivy is releasing their first full-length album! Come celebrate the achievement with us at The Mothlight on the Spring Equinox, March 20th, 2020, as we perform the album in full. Featuring a full band of Asheville's finest, this rare show will not be one to miss.

and, as always, Rachel Waterhouse.

Noah Proudfoot and the Botanicals will open the evening with their uplifting blend of soul/roots/rock.

Sister Ivy is the voice of the vine that weaves in and out of roots and open air, mixes with the weeds, and climbs to lofty vistas on the limbs of grand trees. A quizzical poet with a voice brimming with turbulent emotion and heartfelt presence, she moves to join the juxtaposed, not only lyrically, but musically, with careful dissonance and timely resolve, blending the mundane with the magical, providing unexpected nourishment and plenty of food for thought. The trio, formed and led by Asheville-local Rachel Waterhouse, fuses Neo-soul, Jazz, R&B, and Rock elements to carry poetic musings to the listener’s ear on a groove-able sonic vehicle with influences spanning from Badu and Glasper to Radiohead and Pink Floyd. Rachel’s lyrical content spans a wide spectrum, emotional states ranging from sweet infatuation to righteous anger; content ranging from entomological curiosity to suspicions of an impending apocalypse. However, no matter how dim the story seems, there is always a glimmer of hope hidden…somewhere.

"Rachel Waterhouse's voice is a deeply expressive and versatile instrument, and the band's instrumental prowess is nothing short of impressive and soulful" -Bill Kopp, Mountain Xpress

“At any given moment, the Asheville, North Carolina, trio Sister Ivy can be an entirely different band from the one they were a moment before. Led by singer/keyboardist Rachel Waterhouse, the band can delve into elastic soul-jazz, singer/songwriter intimacy, or jam-band style experimentation, but it’s always captivating music, regardless."-Greenville Journal

“This meeting of old and new, combined with Sister Ivy’s precision and excellent song-smithing, should make this particularly appealing to the more intelligent listener.” -Caleb Calhoun, Ashvegas

Noah Proudfoot and the Botanicals:

From Tedx to festivals and venues up and down the East Coast, Noah Proudfoot is a soul-powered songwriter doing things a little differently. Using elements of funk, R&B, and roots-rock, his soulful voice stirs the human spirit and dives beneath the static of daily life. Studied in poetry and certified as a yoga teacher, his lyrics are carefully crafted to motivate and inspire. His full band, Noah Proudfoot and the Botanicals, broadcasts these messages on a much larger scale, gaining attention in the transformational music scene and attracting a following of like minded fans. Opening for bands such as Satsang and Yaima, they have become known as a group that can deliver a high-energy dance party with a purpose. Last year they released their debut EP 'Travel Light,' at the Asheville Music Hall to an enthusiastic crowd of fans. This year they delivered a brand new single, 'Wild One,' which draws on indie-rock influences and displays the bands ability to capture a multitude of sounds and styles. Catch them on the road this year as they make their way to festivals across the region, and continue their mission of uplifting audiences and inspiring a generation of change-makers.