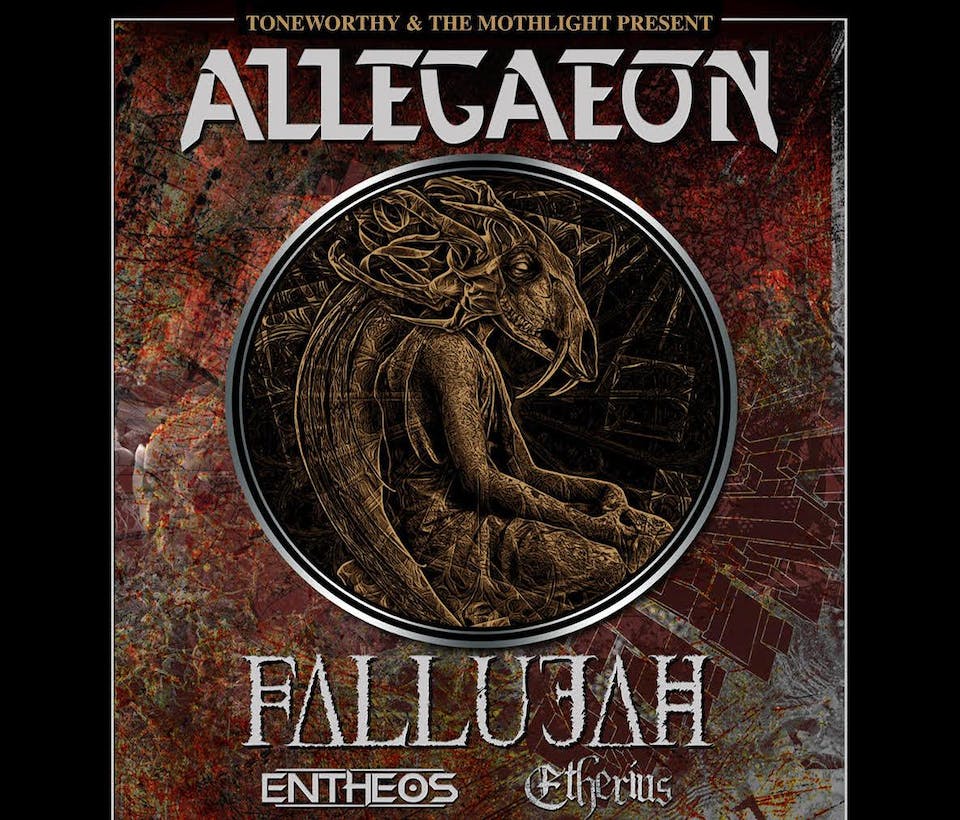 "In light of recent announcements made by the CDC, we are left with no other choice but to postpone The Terrestrial Takeover Tour. We apologize to everyone who was looking forward to seeing us and our friends in Fallujah, Entheos, and Etherius. We are actively working on ways to fill the void left behind by this postponement and will update everyone as soon as we can organize an event that our fans & friends can take part in from a safer space. Take care of yourselves and stay tuned." 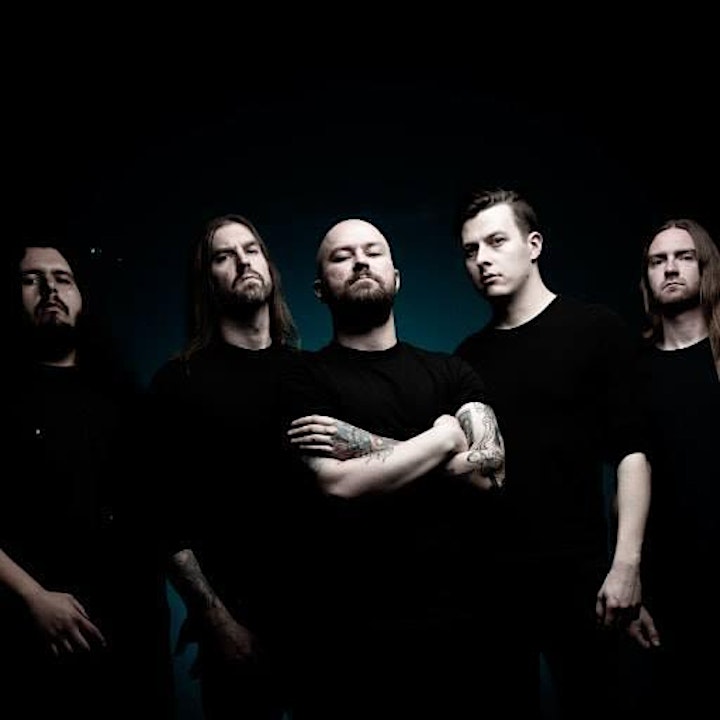 Allegaeon (pronounced: uh-lee-juhn) was formed in 2007. In 2008 they released their 4 song, self-titled EP and quickly gained attention of Metal Blade records.

July 20th, 2010 brought Allegaeon's debut album Fragments of Form and Function (FOFAF). FOFAF was recorded in Denver at Flatline Audio with Dave Otero (Cephalic Carnage, and Cattle Decapitation) Metalstorm.net lists Allegaeon's debut album, FOFAF, as the #4 rated death metal album of all time (by the websites rating standards). FOFAF was critically acclaimed by many and catapulted the band out of obscurity and into the ranks of metals elite new bands.

In January 2012, the band traveled to Southern California and entered the studio with Daniel Castleman to begin work on their follow up record titled Formshifter, which peaked at #29 on the Billboard heatseekers chart. It also marked the last record guitarist Ryan Glisan would do with the band.

Allegaeon released their third full-length album Elements of the Infinite on June 24, 2014. Once again recorded at Flatline Audio with Dave Otero, the band expanded their classical music side with the addition of orchestral passages. With the added talents of guitarist Michael Stancel, and drummer Brandon Park, the music videos for "1.618" and "Threshold of Perception" showed the bands more fun loving personalities noting "we take the music seriously, but not ourselves". Elements debuted at number 25 on the Hard Rock Billboard chart.

The band’s latest album Proponent For Sentience, released in 2016, marked the first with vocalist Riley McShane, and included guest appearances from Bjorn "Speed" Strid (Soilwork) and Benjamin Ellis (Scar Symmetry). The album showcased McShane's dynamic vocal range with the first appearances of throat singing, pitch screaming, and clean vocals. Metal Injection reviewed the album at a 9/10, and the album reached number 11 on the US Hard Rock Billboard chart, and number 33 on the US Rock chart. 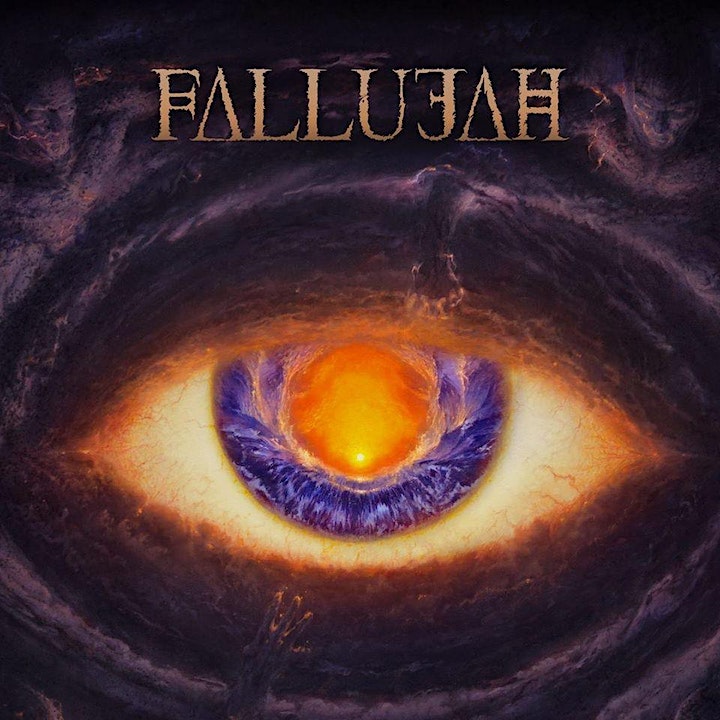 “The songs on »Undying Light« are raw, confident, and new,” says guitarist/primary songwriter Scott Carstairs. “I think the last couple of albums we spent a lot of time experimenting with different elements, such as clean guest vocals, synthesizers, or different kinds of instrumentals. This time around we knew from the get-go that we wanted this record to be raw and honest. We wanted to move the music further but still showcase the sound and emotions this band has always evoked. With the addition of Antonio, we have been able to take the sound to new levels of emotion, a sound we have been striving to achieve for years but couldn’t quite get to until now.”

Formed in 2007 when Carstairs was still in high school, FALLUJAH quickly commenced writing material that would comprise a 7-song 2009 demo, the »Leper Colony« EP, and a 3-song 2010 demo. Over the three-year period FALLUJAH honed their craft by playing shows large and small, as well as finding more suitable musicians to play the band’s increasingly more complex songs. In 2011, FALLUJAH released their debut full-length, »The Harvest Wombs«, on Unique Leader to rave reviews. The »Nomadic« EP followed in 2013 and second full-length, »The Flesh Prevails«, in 2014. With »The Flesh Prevails«, FALLUJAH shot up Billboard’s Heatseekers Albums Chart, settling at #2. FALLUJAH not only impressed their core fanbase on »The Flesh Prevails« but also the progressive rock/metal community - Prog Archives awarded it 4/5 stars and calling it “[a] step forward.” By this point, the Californians had proven themselves on the road, appearing on not just one but four different Slaughter-branded tours. FALLUJAH had also traversed Europe in its entirety. When the group’s third full-length, »Dreamless«, landed in spring of 2016, FALLUJAH were full-on progressive - ex-CYNIC axe-wiz Tymon Kruidenier soloed on the title track - yet continued to hit hard. Praised on all sides, »Dreamless« cemented FALLUJAH as extreme metal rising stars, having charted in the U.S., Canada, and Australia. For all its successes, »Dreamless« also paved the way for what lay beyond.

“»Undying Light« is something else entirely,” Carstairs says. “We wanted this record to be a statement of what the band is and will continue to be. We made this record to illustrate who we are in our purest form. We believe this is the truest sound we have honed on in yet.”

For the »Undying Light«, the lyric writing responsibilities were handed off to new member Palermo. Previously with former frontman Alex Hofmann, the lyric writing on »Undying Light« centers on an ego-driven and apathetic society as a result of social media consumption and reliance. Carstairs says each of the album’s 10 tracks is a snapshot of a disillusioned, narcissistic society. These aren’t examples of Palermo pontificating but rather portending the inevitable. In many ways, the lyrics posit the idea that we’re already living the horrible scenario.

“Antonio being such a talented lyricist with his previous projects, we had confidence that he would have no problem writing the next era of FALLUJAH lyrics,” says Carstairs. “Though Antonio was the main driver for lyrics, it was very much a collaborative effort. Antonio would first come up with the lyrical themes of each song and then run them by us so that we were all on the same page at the end of the day. Also, by involving the rest of the band in his own creative process, we’ve come away with an album that we all are able to feel on a very emotional level, which is something new and exciting for us all. The main thing he wanted to bring to the table lyrically was an emotionally visceral experience for the listener. He juxtaposes the use of raw, visceral emotions to point out a general lack thereof.”

Produced by Scott Carstairs and Mark Lewis at OHMNI Studios in Nashville, Tennessee over the course of three months, »Undying Light« is not only the band’s most powerful recording to date but it’s also FALLUJAH’s most representative. The intensity, clarity, and depth of 'Glass House,' 'Last Light,' 'The Ocean Above,' and 'Sanctuary' is unlike anything in FALLUJAH’s back catalog. Here, the Mark Lewis mix and master shine through. »Undying Light«’s overall production value is heavy and aggressive yet inviting and thoughtful.

“Having worked with Mark in the past, we were comfortable that he would nail the sound we wanted and help us take the music to the next level,” says Carstairs. “This being his second time working with us I think he really understood what we needed. Every amp, snare, mic, kick or tone we heard, we instantly knew if it was meant to be on the record. It was like we all had a very clear vision of what this record was supposed to be and just calmly brought it to life. It was a vibe we hadn’t heard in our own music or music in general. It was something we chased until it was finished. Overall, »Undying Light« was a great experience.”

While FALLUJAH’s previous covers - Tomasz Alen Kopera’s »The Flesh Prevails« and Peter Mohrbacher’s »Dreamless«, respectively - have been lauded by fan and press alike, for »Undying Light« FALLUJAH went down a different path. They commissioned their new album cover from artist Nick Keller. Known for his WETA Workshop conceptual art for Peter Jackson’s global cinematic smash, »The Hobbit«, as well as his cover art for THE BLACK DAHLIA MURDER, HERESIARCH, and ALTARAGE, Keller’s work on »Undying Light« is stunning from afar and breathtaking up close. FALLUJAH’s incredible album cover run continues…

“Nick is an amazing artist,” says Carstairs. “We had tried to commission him in the past but couldn’t work it out until now. He is an immense talent that also has a passion for extreme music. One look at this guy’s portfolio and you know you’re dealing with a man with alien talents. For »Undying Light«, Nick was able to paint the art to the vibe of the music, which is something we’ve always wanted an artist to do. The end result is something as mind-melting and psychedelic as the sound of record.”

From opener 'Glass House' to closer 'Departure,' FALLUJAH aren’t shying away from their instincts-driven approach. Instead of over-analyzing the song and music creation process, they asked their proverbial guts, “Does this feel right?” If it felt right, the members of FALLUJAH went with it. The result is a genuine expression of their creativity on »Undying Light«. The addition of Palermo has only galvanized the quintet to continue to push forward.

“We strongly believe that this new record will give our fans something they will love just as much as we do,” Carstairs says. “We hope this record will also rekindle the fire within our fans around the world and show them that we took the past year off for a reason. That is: to give them a body of music worthy of their unwavering support, dedication, and loyalty.” 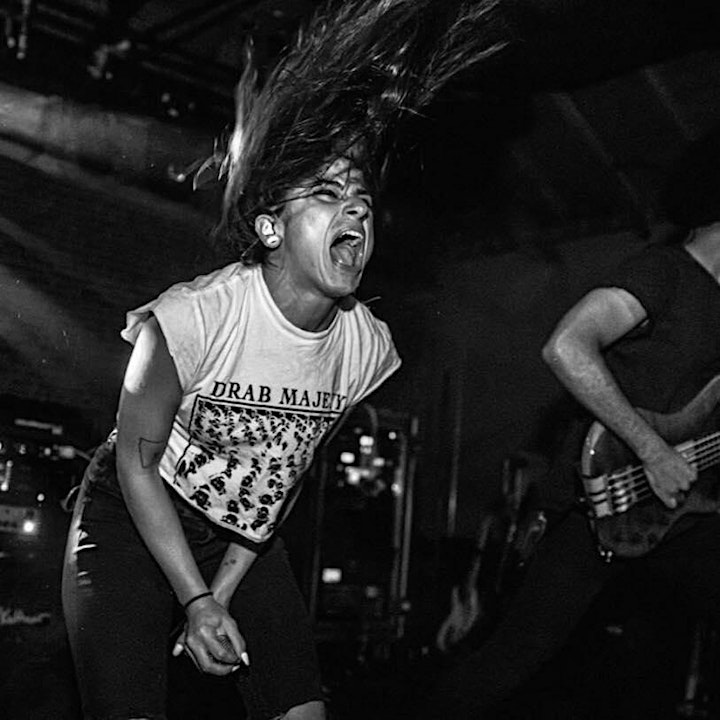 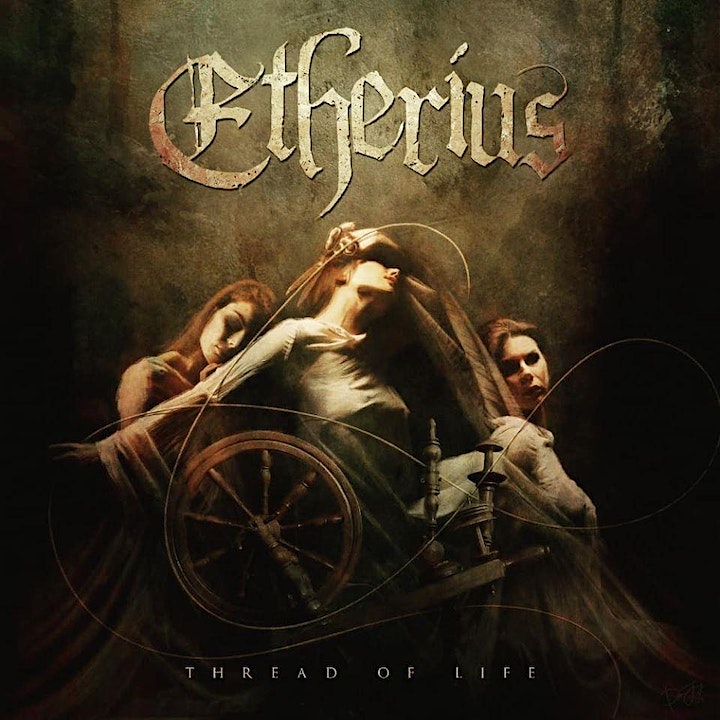 A veteran of the New Jersey metal scene, the formation of Etherius by guitarist Jay Tarantino in 2017 was inspired by extensive recording and touring experience gained as rhythm guitarist for instrumental virtuoso Angel Vivaldi since 2009. Looking to step out from the "sideman" role and lead his own project, Jay sought to create a band that made music unlike the djent/electronic stylings of the current instrumental/progressive metal scene. Looking to combine his love of old school metal bands such as Megadeth, Testament, and Iced Earth with neoclassical shred and progressive metal, Jay enlisted the services of his old friend and drummer/producer Zaki Ali after a chance encounter at the Winter NAMM convention in early 2017. The lineup was finalized a few months later with the addition of bassist Chris Targia and second guitarist Jon Perkins. In August of 2018 Etherius released their debut EP "Thread of Life," with which they gained recognition as a force in the instrumental guitar genre. Etherius spent most of 2018 and 2019 writing and recording the follow up to “Thread of Life” and playing gigs in the NY/NJ area supporting artists such as Angel Vivaldi, Nita Strauss, Seven Spires, Virgil Donati, Within the Ruins, Tony Macalpine, and Michael Angelo Batio among others. 2020 will see the band release their first full length album “Chaos. Order. Renewal” in April. The band will also embark on their first ever tour supporting Allegaeon and Fallujah.