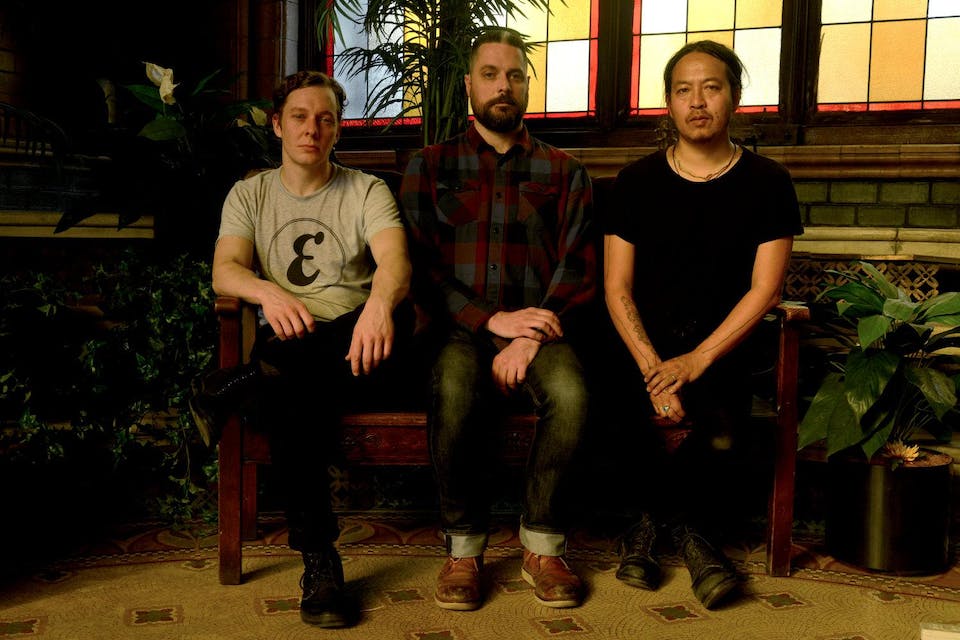 iCal
Google
Kuzu - live at The Mothlight in Asheville, NC

KUZU is a hard-charging but patient trio that came together in the fall of 2017, after saxophonist Dave Rempis, a stalwart of the Chicago improvised music scene, worked with both Tashi Dorji (guitar) and Tyler Damon (drums) individually as part of a lengthy solo tour of the U.S. that he undertook in the spring of that year. Dorji and Damon’s work as a guitar/percussion duo has become well-known, a highly refined and specific language developed through relentless touring and recording over the last few years, with a sound that straddles improvised music, rock, and any number of as-yet-undefined territories. These two provide an incredibly fresh take on the possibilities inherent to spontaneous composition. Superimposing Rempis into this mix was a logical next step after the relationships they’d forged individually. The trio’s debut record Hiljaisuus (“silence” in Finnish…) was released on LP by the well-known label Astral Spirits in summer 2018, and on cd by Aerophonic Records in January 2019. The band plans two new releases in early 2020 on the same labels, using material recorded live on tour in October 2018. They also plan tours of the US and Europe in 2020.

Musically, these three create a highly focused pallet of sounds. At times, spacious gestures carve up the canvas with the austerity of a calligrapher, while at others those sparse gestures build into an unstoppable tsunami of energy. Those waves are never impulsive or impetuous though, they ebb and flow logically and patiently out of simple and clearly defined sources. Rempis’ penchant for pentatonic melodies and rough and tumble timbres combines seamlessly with Dorji’s thick, raw sound and singular approach to intonation, buttressed by Damon’s rapid-fire yet powerful stickwork, to produce a music that’s exquisitely detailed at any one point in time, yet carries the narrative arc of their often set-length explorations without ever losing its coordinates. In this music you can hear the many hours together in a van roaming the hills of Tennessee and Pennsylvania, the plains of Texas and Illinois, and the forests of North Carolina and New England, trading playlists ranging from jazz icons like Pharaoh Sanders and Yusef Lateef to Scandinavian black metal bands like Craft and Darkthrone. While this isn’t a new thing in creative music – broad ears are a trademark of musicians in this world - what makes the pairing so unique is the truly organic way in which they string these influences together into a coherent sound. This isn’t a Frankenstein pastiche of bits and pieces held together with duct tape and glue, and a paper-thin conception. This is an emotionally deep and sincere effort to join genuinely disparate influences arrived at only through patient toil. When we ask if Rempis is channeling Coltrane, or a Turkish clarinet player; does Dorji sound like a Delta bluesman, or a southeast Asian rocker from the 70’s; is that Art Blakey or John Bonham rolling out through Damon’s toms; the answer is undoubtedly all of the above. And yet, despite the breadth of the trio’s inspirations, their music never collapses under the weight of its aspirations, fearlessly carving out a new corner in the broader sonic landscape.