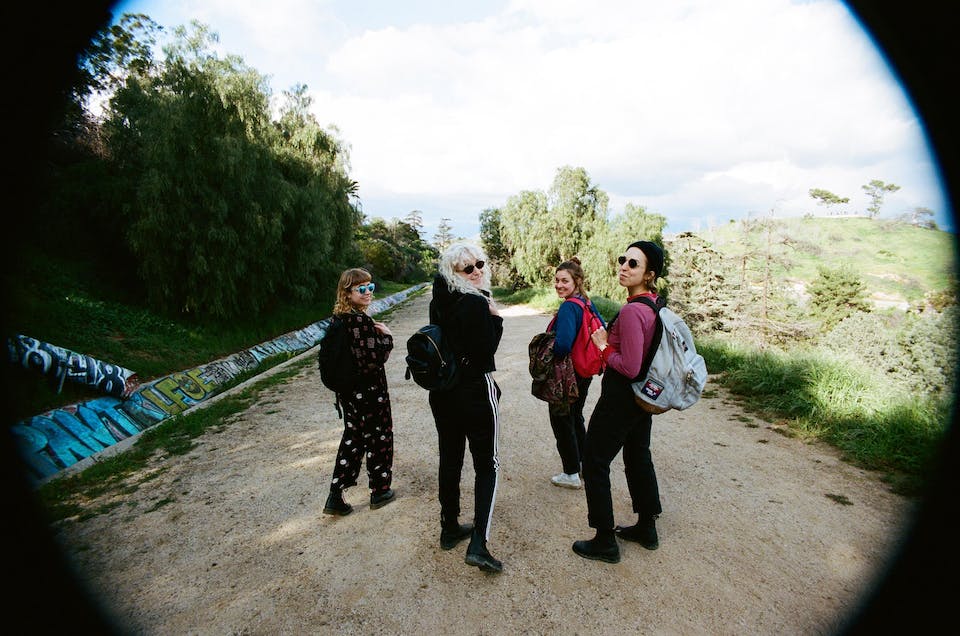 A few years ago, while in a tour van somewhere in Idaho, the members of Chastity Belt—Julia Shapiro, Gretchen Grimm, Lydia Lund, and Annie Truscott—opted to pass the time in a relatively unusual fashion: They collectively paid one another compliments, in great and thoughtful detail. This is what we like best about you, this is why we love you.

I think of that image all the time, the four of them opening themselves up like that, by choice. It’s hard to imagine other bands doing the same. But beyond their troublesome social media presence—see: the abundance of weapons-grade duck face, the rolling suitcase art—and beyond the moonlit deadpan of say, “IDC,” lies, at the very least, an honesty and an intimacy and an emotional brilliance that galvanizes everything they do together. Which is a fancy way of saying: They’re funny, but they’re also capable of being vulnerable. “Giant Vagina” and “Pussy Weed Beer,” two highlights from their aptly titled 2013 debut, No Regerts, were immediately preceded by a sublime yet easily overlooked cut named “Happiness.” I saw a younger, still unsettling version of myself all across 2015’s Time to Go Home.

This June marks the release of I Used to Spend So Much Time Alone, their third and finest full-length to date. Recorded live in July of 2016, with producer Matthew Simms (Wire) at Jackpot! in Portland, Oregon (birthplace of some of their favorite Elliott Smith records), it’s a dark and uncommonly beautiful set of moody post-punk that finds the Seattle outfit’s feelings in full view, unobscured by humor. There is no irony in its title: Before she had Chastity Belt, and the close relationships that she does now, Shapiro considered herself a career loner. That’s no small gesture. I can make as much sense of this music as I can my 20s: This is a brave and often exhilarating tangle of mixed feelings and haunting melodies that connects dizzying anguish (“This Time of Night”) to shimmering insight (“Different Now”) to gauzy ambiguity (“Stuck,” written and sung by Grimm). It’s a serious record but not a serious departure, defined best, perhaps, by a line that Shapiro shares early on its staggering title track: “I wanna be sincere.”

When asked, their only request was that what you’re reading right now be brief, honest, free of hyperbole, and “v chill.” When pressed for more, Truscott said, “Just say that we love each other. Because we do.”

This is who they are, this is why I love them.

“They’re funny, and slightly goofy, and gently vulgar, and they play with an appealingly loose, relaxed confidence.” – Pitchfork

“The guitars on this record…have a nice ring to them, like Liz Phair’s recordings.” – NPR 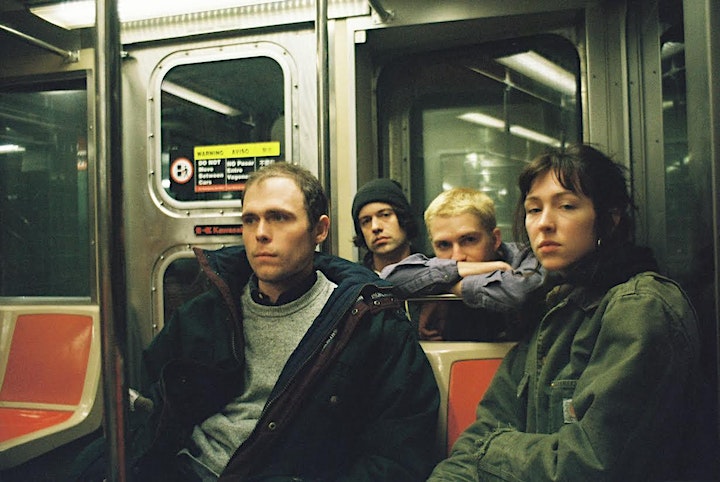 On their third full-length ​Remembering The Rockets ​(out 7/26 via Tiny Engines)​, Strange Ranger continue to excel at translating the way intimacy can feel so overwhelmingly gigantic. With a dozen releases across their 10 years as a band, the Philly-via-Portland-via-Montana group, currently featuring Isaac Eiger (guitars, vocals), Fred Nixon (bass, piano, vocals), Nathan Tucker (drums), and Fiona Woodman (vocals), have traversed genres, moods, and textures while maintaining one important throughline: an exploration of closeness.

“Trying to close the distance between yourself and another person and wondering how much can really be done about that gap,” Eiger says. “​Sometimes you don't want to be close with others but you feel guilty, and sometimes you do but you can't.”

Their 2016 double-LP ​Rot Forever​ (which they released under the name Sioux Falls)​ ​was a 72-minute freakout that paired Built To Spill grandiosity with early Modest Mouse intensity. Many of the songs were six-minute treks that pushed guitar/bass/drum indie-rock to its breaking point, but the band was singing about crawling into bed and running back a lifetime’s worth of minor interactions.

After putting that into the world, Eiger and Nixon (the primary songwriters) felt they had gotten a rip-roaring rock record out of their systems, so they hung up their distortion pedals and traded caustic yelps for Alex G-esque croons on 2017’s ​Daymoon​ (Tiny Engines). It was a synth-adorned, insular bedroom-pop record that floated rather than soared, and they opted for lyrical impressionism over the hyper-specific outbursts of ​Rot Forever​.

On both albums, Eiger’s writing style reads like a loose assembly of quotes from conversations he’s had with others (some trivial, some extremely confessional) spliced with his own, private introspections. He asks a lot of questions in his music, often with no traditional context or exposition, which forces the listener to fill in the blanks between the visual details (“I thought you talked to the reporter / she had a polka dot recorder”) and the dialogue (“how was work, are you okay? / how’s your mom, is she the same?”) to either understand his story, or project your own encounters onto his.

Eiger, who writes the bulk of Strange Ranger’s lyrics, is a modern master of conveying the anxiety and uncertainty of growing older through a mixture of childhood nostalgia and interpersonal tidbits. There’s plenty of that on ​Remembering The Rockets​, but after all of these years of singing about his own coming-of-age story, the album approaches the quandary of whether he’ll ever be able to impart that process—through which he’s reaped so much artistic joy and curiosity—onto someone else.

“​So much suffering and horror is coming if we don't seriously restructure our entire society, and I just really hope we get it together. I want to be a dad more than basically anything, and it's unclear if that'd be an OK decision to make,” he says.

For a topic as severe as ecological collapse affecting his own parental aspirations—as well as other melancholy ruminations on loneliness, the passing of time, and the complications of emotional intimacy—Strange Ranger still ended up making the lushest, smoothest, and most pleasingly hypnotic album of their careers.

“​After making ​Daymoon,​ I think Isaac and myself were both feeling pretty creatively exhausted with the rock band format,” Nixon says. “We wanted the feel of the next record to put you in a trance.”

Opener “Leona” is a celestial pop song with a springy bassline and a shimmering, magical synth effect that dusts over its punchy outro groove. “Nothing Else To Think About” is a bobbing sunset soundtrack with a drum sample that puffs and clacks behind its ASMR-inducing bassline. For “Beneath The Lights,” Eiger pulls out the drawly, prickly croon of a ​Daymoon ​ballad like “Most Perfect Gold of the Century” and then contorts it with warbling, Justin Vernon-esque auto-tune. Ambient interludes like “athens, ga” and “‘02” are void of vocals and “traditional” rock elements altogether.

“It was definitely a learning curve figuring out how to do some of the weirder stuff,” Eiger says. “We've been using keyboards for a while now, but before we made this record we got this old Japanese synthesizer [Korg M1] which has like a trillion sounds. So that was a totally different experience.”

“We really didn't know what we were doing and probably stumbled our way into a bunch of sounds we wouldn't be able to recreate if we tried,” Nixon adds.

Portland, OR producer Dylan M. Howe was an essential contributor in this regard. Most of the samples and electronic beats were designed with Howe’s assistance, and he helped the band navigate the archaic software of the Korg M1—which was used for nearly every synth sound on the album. For many of the songs, such as “Message To You”, which Fiona Woodman sings the entirety of, the only component the band had going into their home studio was the drum loop. From there, they experimented with different arrangements and benefitted from Nathan Tucker’s versatile drumming abilities to build that song, and many others, outward.

Although Eiger taps The Cure, Oneohtrix Point Never, and Yves Tumor as integral influences, the main inspiration behind their foray into trip-hop drum loops and unearthly reverb was the 1996 song “Standing Outside a Broken Phone Booth With Money In My Hand.” It’s a one-hit wonder from the alt-rock group Primitive Radio Gods that Eiger first heard in the van a few years back, and he found it mesmerizingly beautiful.

“​I think we've always been attracted to music that you can nod your head to, and this time around I think we really tried to emphasize that,” Eiger says.

Tracks like “Pete’s Hill,” “Planes in Front of the Sun” and “Leona” lock into a similar breed of entrancing, rhythmic bliss. And they hit with maximum impact every time because they’re tastefully offset by a cheeky alt-country burner like “Ranch Style Home,” or a Lemonheads- esque cruiser like “Sunday.” But like all Strange Ranger albums, the band saved the most emotionally devastating songs for its finale.

“Living Free” and “Cold Hands Warm Heart” play like they’re in conversation with one another. The former is a synth-soaked reckoning with age (“all the years as blurry cars and trees / screaming right past me”) and purpose (“awkward angels in the snow / what if I just want a family?”). The latter is a sparse, two-and-a-half-minute piano ballad where Eiger acknowledges tepid hope as the only way forward. “Flickers of a world to come / here but lovelier than this one / see it rippling in the river,” he sings with a shaky intonation.

“​The image of a rocket in the sky just feels very beautiful to me and full of possibility,” Eiger says. “If you're someone who wants to have kids and you decide not to, that kinda feels like folding and just saying, "yeah everything is fucked, there is no future." And why even live at that point? It sucks that ‘hope’ has—for good reason—become this cheesy, lame idea. But if you've got no hope, you're completely fucked in a situation like this one.”