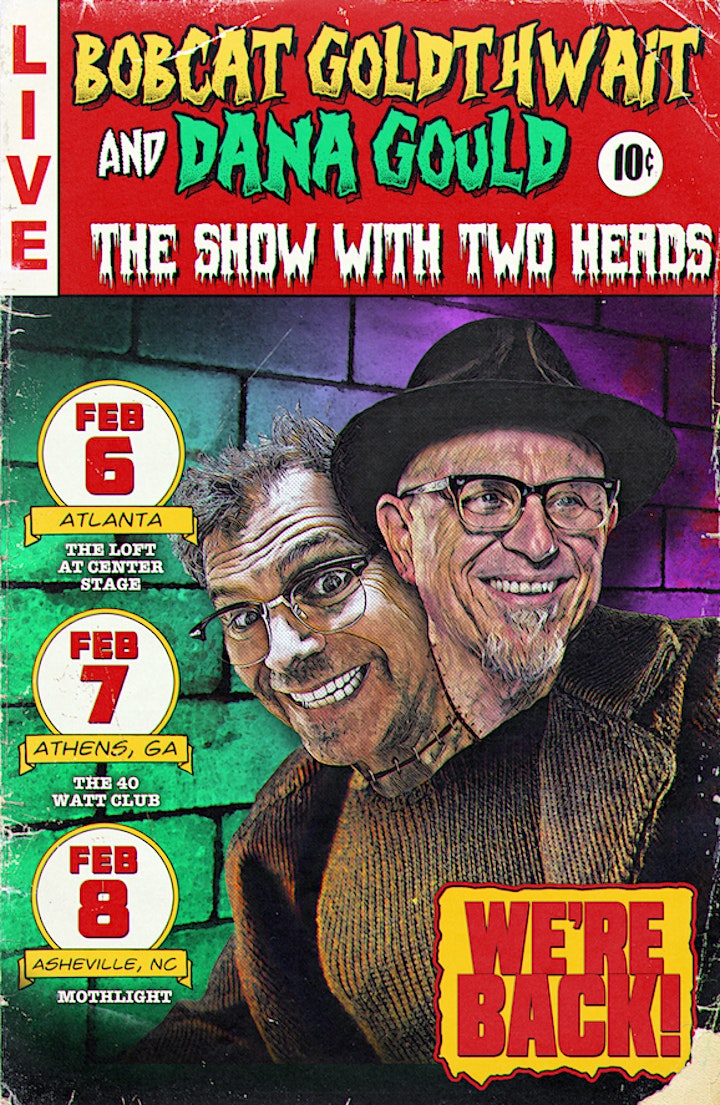 Bobcat Goldthwait and Dana Gould are coming to The Mothlight for one very silly night!!!

The Show With Two Heads comes to town, featuring Bobcat Goldthwait of Police Academy fame, who has since gained acclaim as the director of such dark comedies as World’s Greatest Dad and God Bless America. Comparably impressive is the second comedic head, Dana Gould, who’s penned multiple episodes of “The Simpsons” and created the IFC comedy/horror series “Stan Against Evil.” 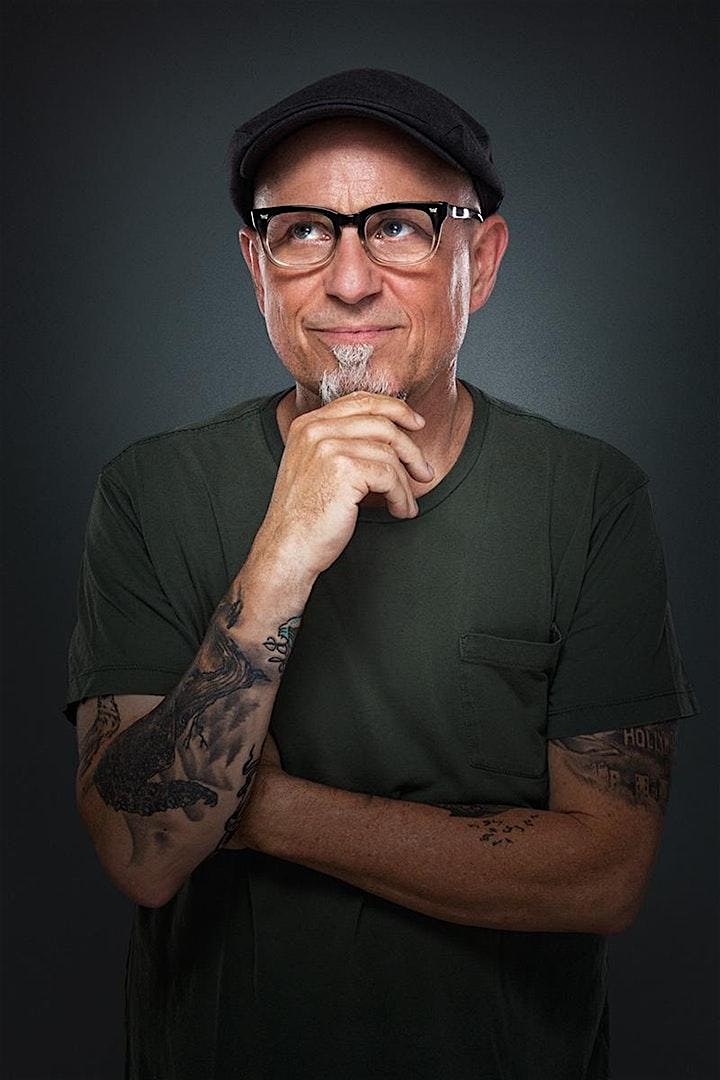 Over the years Bobcat has amassed legions of fans with his brutally honest, outrageous, and off-beat comedy that has made him one of the most recognizable comedians in show business today. Goldthwait is as edgy as ever and his stand-up continues to draw crowds to comedy venues across the country with his hilarious riffs on his personal life, politics, and humorous stories about his over 30 years in show business.

Bobcat’s creative imagination combined with his undeniable gift to write and direct is clearly displayed on the big screen and television. Among his many television projects currently in the works, Tru TV has announced the series premiere in early 2018 of its second-ever scripted series, “Bobcat Goldthwait's Misfits & Monsters.” This genre-mashing, scripted anthology comedy series will bring viewers twisted morality tales from the darkly witty mind of creator and four-time Sundance Award-winning writer and director Bobcat Goldthwait. Each episode will tell a different story in a different genre – including 1970s-era science fiction, psychological thriller, romantic comedy and reality – and will satirize our social norms and exploit the awkwardness of its flawed characters. This is not the first time Goldthwait has worked with the Tru TV network. He also directed several episodes of the Tru TV series “Those Who Can’t,” a half-hour show that follows three trouble-making teachers that are more inept than the kids they teach. They're out to beat the system as they struggle to survive each day on their own terms. Goldthwait has also just finished writing and directing a pilot for Amazon with Michael Patrick King and Bridget Everett, called “Love You More.”

As a film maker, Goldthwait has come a long way since the 1991 debut of his first movie “Shakes the Clown.” Since then he has continued to pursue his passion for writing and directing movies. His imaginative eye behind the camera caught the attention of Esquire Magazine where they named Goldthwait “Director of the Year.” His seventh and most recent big screen achievement, is the Sundance nominated film “Call Me Lucky.” The critically acclaimed film bravely tells Barry Crimmins’ incredible story. Bobcat’s movie accomplishments also include; “Willow Creek,” a found footage horror film about Big Foot, the dark comedy “God Bless America,” a modern-day Bonnie & Clyde displays his inimitable talent for writing, “Windy City Heat,” “Sleeping Dogs Lie,” and “World’s Greatest Dad” that starred Robin Williams. There’s no doubt, there will be many more movies to come.

Goldthwait unleashed his one of a kind brand of comedy in his Showtime one hour special and DVD entitled “You Don’t Look the Same Either.” The genre-defying “Police Academy” alum returned with a self-deprecating and topical instant comedy classic, taking the audience on a hilarious journey through his 30 year career as an 80’s icon, to the guy who lit the Tonight Show set on fire...literally!In addition to his big screen resume, Bobcat has shared his behind the camera talents on several television shows such as; “Jimmy Kimmel Live,” “The Demetri Martin show,” “The Chappelle Show,” “The Man Show,” “Maron” and “Crank Yankers.” He has also directed multiple comedy specials throughout his career, most recently Patton Oswalt’s latest special for Netflix.Best known for his unforgettable movies that were huge in the 80's, Bobcat has also starred in several HBO specials and a slew of television appearances too numerous to mention. Bob continues to push the envelope with his unique brand of humor headlining major comedy clubs across the country. 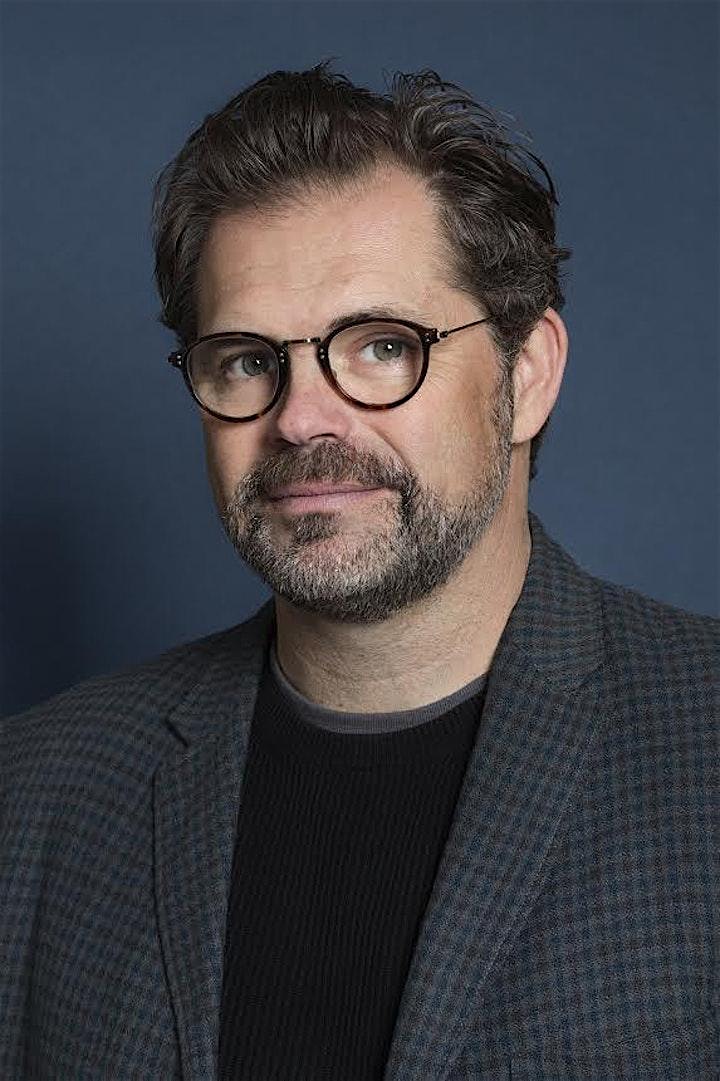 Dana Gould began his professional comedy career at the age of seventeen. Between Comedy Central, HBO and Showtime, Dana has six solo stand-up comedy specials to his credit. He has appeared on THE LATE SHOW WITH DAVID LETTERMAN, JIMMY KIMMEL LIVE, CONAN, MARON As an actor, Dana has had memorable turns on SEINFELD, PARKS AND REC, is one of the few actors to play his live-action self on FAMILY GUY. He was a cast member of Frank Darabont’s 1940’s crime drama MOB CITY, in addition to numerous roles in films such as 2016’s cult horror anthology SOUTHBOUND. Speaking of horror anthologies, (and we were) Dana also recently completed filming CREEPSHOW for AMC’s Shudder platform.

Dana was a writer/performer on the original BEN STILLER SHOW and maintains an equally active career as a writer. After creating the pilot WORLD ON A STRING (with The Simpsons’ Jay Kogen), he co-created MTV's late, lamented SUPER ADVENTURE TEAM with his old Ben Stiller office-mate Rob Cohen. Dana then joined the staff of THE SIMPSONS, where he was a Co- Executive Producer and performed several voices for the show. He was also a producer on NBC's PARKS AND REC.

In addition, Dana recently developed a hour-long series based on Steve Niles’ comic book series THE OCTOBER FACTION for NETFLIX, and his graphic novel adaption of Rod Serling’s original draft of the screenplay for PLANET OF THE APES is now on the shelves from Boom! Comics.

Despite all this, stand-up remains a focal point of Dana’s career, and he continues to perform regularly across the country. His monthly podcast, THE DANA GOULD HOUR, frequently resides in iTunes' top ten comedy downloads. In 2017, Dana released MR. FUNNY MAN on Kill Rock Stars, a predominantly indie music label. MR. FUNNY MAN, Dana’s first comedy album since 2015’s I KNOW ITS WRONG, debuted on iTunes comedy chart at #1.